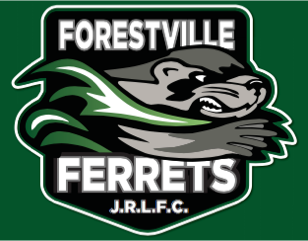 Forestville Ferrets is a rugby league club for Junior and A-Grade players. It is located in Forestville, New South Wales, Australia.

Forestville is on the northern edge of Sydney and players are welcome from all the surrounding suburbs and the Northern Beaches. The Ferrets club leases dedicated grounds located at the bottom of Currie Road, Forestville. The Club has its own clubhouse which has an “on-function” liquor licence with a licensed canteen for players and guests who are over 18 years.

The Club has excellent facilities: two playing fields, training areas and a fully equipped weight gym, as well as a bar, meeting rooms and entertainment space.

CLUB HISTORY – HOW IT ALL BEGAN

The local Barber was Brian Bourke who became the first President of the Club with the other patrons of his shop becoming the Office Bearers.

Although there was opposition from some areas for the Club’s inauguration – one being Belrose-Forest United, – the formation went ahead with the backing of Forestville RSL Club, led by their Secretary- Manager Tom Lonergan.

Tom agreed to be Patron of the new Club and as most senior teams were given logos in most Clubs, the nickname of Tom Lonergan was given to the newly formed D Grade side – the “Ferrets”. The name stuck and is well known in league circles today.

Recruitment began with the schools in the area being targeted as well as door knocking to form teams.

By 1969, Forestville JRLFC fielded 20 teams in the Manly competition spreading their training onto fields between Allambie and Forestville. So in the same year a futurist committee began negotiations with Warringah Council for a lease of grounds we now know as Ferretville.

This message is only visible to admins:
Unable to display Facebook posts

Error: (#10) This endpoint requires the 'manage_pages' or 'pages_read_engagement' permission or the 'Page Public Content Access' feature. Refer to https://developers.facebook.com/docs/apps/review/login-permissions#manage-pages and https://developers.facebook.com/docs/apps/review/feature#reference-PAGES_ACCESS for details.
Type: OAuthException
Code: 10
Click here to Troubleshoot.